Home > Experienced Walkers > Scrambling for the Walker or Hiker

Scrambling for the Walker or Hiker 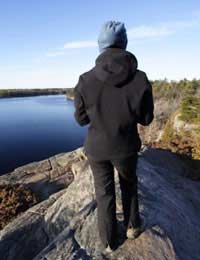 Hill walking can be classed as one of the less extreme forms of exercise you can take part in within such an environment. At the other end of the scale there’s mountaineering, of course. However, for many others, scrambling is something that lies somewhere in between which is a lot more adventurous to some than a hill walk, yet not quite so bold and daring as a full scale mountain expedition. However, unless you know what you’re getting yourself into, scrambling can still be highly dangerous.

There is no strictly defined definition as such as ‘scrambling’ to one person might mean something very different to another but, in essence, it lies somewhere within the realm of rock climbing but without the need for any specialist equipment and it just involves the use of your hands as well as your feet to make an ascent. That said, some of the more difficult scrambles involve the use of ropes. However, prolonged use of ropes and related instruments such as belay devices would probably fall into the category of rock climbing. Possibly the best description of scrambling would be ascending a hill or mountainous area where your hands are often used to hold your body weight as opposed to just your balance as is the case when out hill walking. Depending on the terrain, however, some might perceive it to be an activity where you simply need to take your hands out of your pockets to get over a bit of rock whereas other scrambles will be far more labour intensive where your hands are concerned and much more dangerous.

The Importance of Route Guides and Grading Systems

Because there are so many different opinions and ‘grey areas’ when it comes to scrambling, and because there is no safety equipment involved, it can be a highly dangerous activity in which to participate unless you’re experienced, confident and/or know the area in which you’re scrambling well. Therefore, it should only be undertaken with a lot of care and a degree of knowledge about the terrain. There are plenty of scrambling resources both online and in specialist book stores which will outline many popular scrambling routes of different levels of difficulty which are commonly categorised into 3 separate grades.

Grade 1 scrambles are usually pretty straightforward with relatively little exposure to danger. More often than not, you can pick your way around tricky areas and it’s only these areas where you’ll probably need to use your hands in order to keep your balance and to progress upwards.

Grade 2s are more difficult involving more technical ability and, perhaps, the use of ropes. Here, the holds might be smaller and the exposure greater with escape often more difficult if you get stuck so they shouldn’t be tackled by a beginner or novice without being accompanied by a more experienced guide.

Grade 3s take it to an even higher level of difficulty and here, you are virtually bordering on rock climbing as ropes will have to be used for most of the time and you’ll have to have the technical knowledge of how to use ropes for protection as there will often be no other escape route for the entire duration of the scramble.

Some route guides even have Grade 3S – the ‘S’ stands for ‘serious’ and these are often actual proper rock climbing routes that have fallen out of favour as rock climbing technical standards have risen but in essence, if you have to ask what a Grade 3S is, you’re nowhere near prepared to do one!

Questionnaire: Why Do You Hike?

How to Really Enjoy Hiking

Geographical Sites & Their Use in an Emergency

Hill Walking
Share Your Story, Join the Discussion or Seek Advice..
Most people who hike can handle grade one, and have probably done so without knowing when hiking steeper paths. That should give an indication as to whether it's something you want to pursue or not. If you're going to scramble, buy a good pair of gloves to avoid cutting your hands on the rocks. It's a small investment to save your skin, and good gloves will offer a better grip. You also need to be quite agile and with good upper body strength.
Richard - 14-Jun-12 @ 9:27 AM
Title:
(never shown)
Firstname:
(never shown)
Surname:
(never shown)
Email:
(never shown)
Nickname:
(shown)
Comment:
Validate: