Home > Walks in the UK > The Coast to Coast Walk 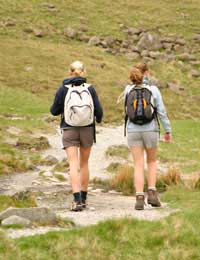 The Coast to Coast Walk was the brainchild of Alfred Wainwright, the man whose guides to Lake District walks have become virtual bibles for the area. Starting at St. Bees Head at the Irish Sea on the West coast, the walk stretches for 220 miles (according to the most recent measurements), finally ending at Robin Hood’s Bay in North Yorkshire.

The unofficial route has been revised from Wainwright’s 1973 original to avoid trespass on private land. Most people tackle it in stages, taking two weeks, or even more, to complete the entire journey, which offers ample time to enjoy the stunning scenery along the route. Most people go from West to East, although either direction is acceptable.

Although Wainwright began in St. Bees, some walkers prefer Whitehaven or even Workington – but St. Bees, with its beach, offers a more satisfying rural experience. To start, Wainwright stated, hikers should dip their boots in the sea before taking the first step. From there, the path goes north along the cliffs then turns inland to cross the West Cumberland Plain. That arrives in the Ennerdale valley, which brings the walker to the first real challenge – Loft Beck, which rises up to the fells.

From there, walkers drop down into Borrowdale and eventually to the Lake District village of Grasmere, where many choose to break their trip for some rest. Leaving Grasmere, hikers are faced with the choice of climbing Helvellyn or taking the easier Grisedale Hause; both routes lead to the village of Pattedale. After that comes the second big climb of the walk, heading up to Kidsty Pike, which is the highest point on the trip. Leaving there, it’s a quick descent to the lake of Haweswater and to the village of Sap, after which hikers pass out of the Lake District.

At Nine Standards Rigg, atop the watershed that divides England, walkers cross into Yorkshire, slowly descending into Swaledale, and crossing the Pennine Way in Keld – which is also the halfway mark of the Coast to Coast walk.

In truth, the walk just grazes the top edge of the Yorkshire Dales, running along the river to the picturesque village of Reeth (there’s also the option of a high path that’s always blustery) before going to Richmond, with its famous castle and market square.

Heading east from Richmond, the trail crosses the Vale of Mowbray, sticking close to the River Wiske all the way to Ingleby Cross before moving off into the North York Moors and joining the Cleveland Way for a number of miles, along Clay Bank Top and all the way to Bloworth Crossing, where the two part company.

The hike keeps running east, going over the moor to Glaisdale, after which the scenery changes from the wild to woods, following the path into Egton Bridge and Grosmont, which brings the last strenuous climb up to Sleights Moor. From there, with the coast virtually in sight, there’s just a trail through Low and High Hesker to the bring the walker to the cliffs (and, incidentally, back to the Cleveland Way).

But it’s just a tease. There are still a few short miles before reaching the traditional end of the Coast to Coast Walk, right on the beach in Robin Hood’s Bay. There, according to Wainwright, those who’ve managed the whole walk should paddle in the sea – and their feet probably need it.