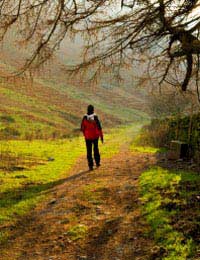 My Bob and I had been hiking together regularly for several years. It had never been a big thing, we’d just meet once a month to put in a day’s walking and talking, never more than 10 miles, before finishing up with a meal and a drink at a local pub. So when he suggested us taking a week’s walking holiday, at first I thought he wasn’t serious.

It seemed he was however, and even had it all planned out, up in Scotland. The only problem was that it would mean covering more than 20 miles a day, which seemed like a daunting prospect, especially when we didn’t know the terrain. He’d done his research, though, and plenty of others had completed this walk. The question was, could we manage it? A week later I rang him and told him we could go for it.

We had eight months to work up to, it, which was just as well, because we both needed that time. I’d been a half-hearted gym person for a few years, sometimes going three times a week if I was motivated, at other times just putting in an appearance once a month. Now it was time to get serious.

After some studying I came up with a plan. It involved regular treadmill and stair machine sessions, as well as strength and cardio' training. I wasn’t about to turn into a body builder, but I needed stamina and endurance if we were going to be walking around 10 hours a day for seven days.

That was fine, but the cosy atmosphere of the gym was no substitute for the real countryside, going up and down hills and along trails. I had to be out there, too, building that side up to complement the work I was doing in the gym. But there had to be a system to it, which involved slowly increasing distances – and given that a fair bit of this training was going to be in the winter, that didn’t sound like a very appealing idea. I’m a fair weather walker, really; I had to get over that.

How I Succeeded in Building Up Stamina

There was no real secret to building up my stamina and endurance. The biggest requirement was commitment. I went to the gym three times a week, and when I wasn’t there, I walked. That was mostly in the evening, for about an hour at a time.

On the weekends I’d head out into the country. As I hadn’t taken any break from hiking I was in reasonable shape, but I knew I really needed to increase distance. After a couple of weeks putting in eight miles, I increased that to 10, then 12, and slowly upwards. The gym helped a lot, I had more energy than before, and a goal gave a focus to it all.

One thing that was vital was drinking enough water when hiking. There was one instance when I didn’t, and the cramp in my calf was so painful that it required a full half hour of rest before I could go on – and even then, only slowly. Having snacks like good trail mix, energy bars and even chocolate helped as a boost when out, too. Add to that meals like porridge for breakfast, that released energy slowly, and plenty of good carbohydrates, such as pasta and I was doing well.

I won’t lie and say it was easy; there was plenty of hard work involved, and at times I’d come home from a hike so tired that about all I could do was eat and sleep. But after four months I was able to walk 20 miles without any real problem, and I kept close to that level until we took our holiday.

It was glorious, with good weather and stunning scenery, worth every minute spent preparing for it. Once it was over, however, we mutually decided to go back to our old 10 mile limit on our hikes. Having proved we could do more – and might again – was enough.