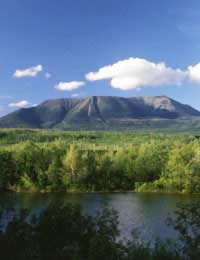 At almost 2200 miles long, and crossing through 14 different states, the Appalachian Trail is the longest hiking route in the world, the ultimate challenge for anyone wanting an extended stroll in the woods – and up and down mountains.

It’s attracted all manner of famous names (not least the writer Bill Bryson, who published a book about his adventures on the Trail), and many less celebrated, as it’s estimated that several millions use the Trail each year, although very few are what’s called 'thru-hikers', completing the entire length in one season.

For walkers, the fact that it was specifically designed as a hiking trail brings many advantages, with regular shelters, plenty of stunning viewpoints, and often proximity to towns as it wends its way north from Georgia all the way to Maine, close to the Canadian border (the direction most people tend to follow, simply because the weather’s better much earlier in the year in the South).

The History of the Trail

The idea for the Trail came from a forester named Benton MacKaye, who first planned it in 1921. However, because of the complexities involved, it was a long time coming to full fruition, although the first section opened in 1923, but it wasn’t until after World War II that the first proper thru-hike happened.

That was far from the end of its development; the Trail has been an ongoing creation. A permanent route was finally established in the early 1970s, and now there are additions that allow walkers to go as far as Alabama in the South, and up into Quebec in the North, although they’re not strictly part of the Trail itself.

What to Know if You’re Hiking the Trail

Probably the first piece of advice to hikers is not to attempt the entire trail in one go, unless you have a few months to spend on the task. One trail runner completed it in a month-and-a-half, but most people take far, far longer, doing it in sections over several months, or even several years.

That said, it’s very hiker-friendly, with plenty of campsites and shelters for those walking the trail, and it frequently comes close enough to towns to find a motel for a hot shower and full meal.

Hikers should be weather-prepared. Even in the spring, the South can be very hot and humid, so having ample water is vital. Also important is carrying calamine lotion, since poison ivy is everywhere (and make sure you know how to recognise it before you begin walking – that can save you a lot of pain and itching). Don’t try starting out in Maine in spring; you’ll find the nights still bitterly cold. Remember, too, that parts of the trail are quite high, which can mean decidedly chilly sleeping, so a good sleeping bag is a necessity.

There’s wildlife, even bears, but with a reasonable amount of care, these should not be a problem – they’re as fearful of man as man is of them. Ticks can be a hazard, so make sure you check yourself often and remove them quickly to avoid the possibility of Lyme disease – and carry something to keep the mosquitoes at bay.

Take those precautions into account, and you should have a great time. The trail is very clearly marked, and there are also what are called the “blue-blazed” trails that can shave off quite a few miles. Take time, however, to enjoy the viewing points and the scenery, some of the most stunning in America, and sign the guest books en route (a Trail tradition).

It’s far from an easy hike, especially down in the Smoky Mountains and in the stages in Maine. But for those who relish a challenge, there’s possibly nothing finer – and certainly nothing longer – in the world.

Top Tips For Wild Camping in the UK
Share Your Story, Join the Discussion or Seek Advice..
If you want to live this vicariously, the writer Bill Bryson has published an hilarious and entertaining book about his experiences on the Appalachian Trail. There are plenty of anecdotes and he makes the difficulties of the trip along part of it amusing. It's a great book to read at night in a tent on a hiking trip when you think at least this isn't as bad as that! And one of these days I'm heading over to American to walk the Appalachian Trail. Now that would be an experience!
Brian H. - 30-Jun-12 @ 9:52 AM
Title:
(never shown)
Firstname:
(never shown)
Surname:
(never shown)
Email:
(never shown)
Nickname:
(shown)
Comment:
Validate: