Home > Walking for Beginners > How Popular is Hiking? 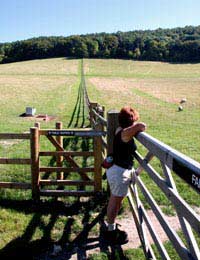 Walking is the most accessible sport in the world. It’s something virtually all of us do every day, anyway, even if it’s simply walking to lunch or to the shops. Go back a couple of hundred years and for most of the population is was the main method of transportation. To travel between cities there were coaches, which cost money many did not possess, or horses, at least for the rich. But most people didn’t have an option; they had to use 'shank’s pony'.

Nowadays, of course, with cheap, ready access to cars, trains, and buses, we don’t need to do that. But walking has remained a very popular sport, both as exercise, and also for the pleasure of getting out and hiking in the country. That’s understandable. It requires no special equipment (although you can spend a small fortune on hiking gear if you wish) or training. You simply get out there and do it.

The Rise In Walking

Possibly the biggest factor increasing the number of hikers in Britain was the creation of the National Parks, which began in 1951 with the Peak District National Park. Although no current national figures exist, there are plenty of statistics (although the most recent survey dates from 1998) available for that particular park that give a strong indication of the number of people using it for walking.

That’s a lot of people going out rambling. Before the National Parks, when most land in the country was privately held, there simply wasn’t the access that exists today. Nor was it so easy to get into the country, so fewer people went hiking. Each year, more and more people go, and although there are no formal figures, it’s estimated that National Park usage increases each year, and that these days probably some 35 million people go hiking each year in our 14 National Parks. Of those, around 10 million go regularly – at least once a month.

There are hiking clubs of one sort or another all over the country, regularly arranging walks. The biggest of all is the Ramblers, a national organisation which has smaller branches around the UK, but currently boasts a membership of around 135,000, and which has existed for close to 75 years, since a little before World War II – it’s notable that the 1930s saw the first real spike in hiking as workers from cities began travelling more into the country for weekend recreation.

Those 135,000 members are serious hikers, spread across 500 groups in 50 different areas, and people who walk on a very regular basis, which is at least twice a month, often at events staged by the Ramblers.

Although walking is all too often thought of as something for older people, that’s definitely not the case (just look around you when out hiking, for example), as the fastest-growing segment of membership in the Ramblers is among those aged 20-30.

The number of walking groups of all kinds has soared. Wherever you go, even in London, you can find between two and 15 groups in an area, and some do focus on the younger age bracket, another indication in the rise in popularity of hiking among the young.

Some of those groups do focus on walking as exercise, which is much more for older walkers (doctors advise a good half hour of exercise three or more times a week, and walking is ideal for that). Those groups don’t walk as far, but they do tend to meet regularly, often weekly, and can be as much social as about fitness.

What Do You Want from Hiking?