Home > Walking for Beginners > Wainwright and the Lake District Walks

Wainwright and the Lake District Walks 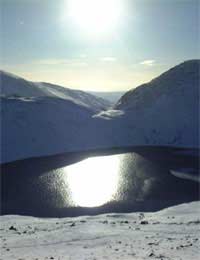 The Lake District has long featured in literature, as the inspiration and home of the poet Wordsworth to the setting for the famous Swallows and Amazons series of children’s books by Arthur Ransome. But the area has never been more celebrated and explored then in the seven volumes that make up the Pictorial Guide to the Lakeland Fells, by Alfred Wainwright. They comprise a bible for Lakes walkers, and have remained in print constantly and sold over two million copies.

Although the Guides are just a fraction of the almost 50 books Wainwright published, they’ve become his best-known and best-loved works, very personal, and lovingly illustrated, books about the exploration of an area he came to love.

Who was Alfred Wainwright?

Always a walker and keen on drawing, Wainwright was born in 1907 and grew up in Blackburn, eventually becoming a council accountant. He first saw the Lake District on a walking holiday in 1930, and was immediately captured by the area, moving there 11 years later, living and working in Kendal.

But he didn’t begin work on the Guides until 1952, by which time he had them fully mapped out in his head. He’d spent the intervening years spending all his weekends in the hills, exploring all the nooks and crannies until he knew them intimately.

Curiously, he never planned to publish the guides; they were going to be just for his own pleasure. Hand-lettered, with precise, careful maps and illustrations, the first volume was almost a work of art, and Wainwright had it printed privately. Only when Kendal’s chief librarian saw it was it printed for wider distribution. Wainwright finished the last of his Guides in 1966.

What do the Guides Do?

It’s a measure of his influence that the 214 fells in the Lake District he wrote about are known as the Wainwrights, and there are people who walk them all – much like bagging the Munroes in Scotland.

People follow his paths religiously (at least as far as possible, with the changes that have happened in the Lakes since his day). His observations, sometimes pithy and witty, enliven a hike, and open walkers to the stunning vistas and pleasures of the Lakes. Often they’re not easy walks, but well worth the effort. Because of the personality Wainwright invested in them, and the perfection of his illustrations (which he actually drew from photographs he’d taken on his wanderings), the Guides are possibly the only books a walker would want to constantly consult whilst out hiking – better than any map.

He brought the Lakes alive in a way no other writer, before or since, has managed. There’s a gentle passion for the Lake District in his work, and the knowledge for walkers that they’re in Wainwright’s footsteps going up or down a fell is like treading through history, touching the past.

The Influence of the Guides

The Guides have touched several generations of walkers, and there have been TV biographies of Wainwright himself, as well as a series tracing his walks. He’s become a celebrity to the walking fraternity and beyond, a symbol of the Lakes (although he wrote about other areas, including an acclaimed book on the Coast-to-Coast walk).

The Guides themselves have been revised, bringing them up-to-date – but carefully, with the new material matching the lettering Wainwright himself used in the books. He had his favourite areas, particularly Buttermere, where his ashes are scattered, and wasn’t afraid to voice his opinions in his works.

His books make essential reading, not just for anyone planning to walk in the Lake District, but also on the walk itself; it’s like carrying a small work of art with you. He loved the fells, and that love is infectious. The Lake District offers some of England’s best walking, but it’s made even better with Wainwright.